Check out our researcher spotlights below to see what Aquaculture Researchers are up to!

What is your major/degree?

Why do you think Aquaculture is important?

What are your career goals and how do they relate to what you      are doing now?

Chrisopher Langdon is a MSc and PhD from the University of Wales, UK in 1977 and 1980, respectively. Currently, Professor Langdon's lab has a broad range of research projects, but the overall goal is aimed to improve sustainable seafood farming. Professor Langdon and his team have been breeding Pacific oysters with high growth and survival for over 25 years under the program called “The Molluscan Broodstock Program” or MBP. The team also do research on the culture of the red seaweed dulse. This effort has resulted in the establishment of several dulse farms on the Oregon coast, California, and British Columbia. A benefit of this research lies in seaweed culture, which assists the environment by removing nutrients and dissolved carbon dioxide from coastal waters. The purpose of the research being conducted stems from the fact that about 80% of the seafood consumed in the USA is imported, with most wild fisheries being harvested at maximum sustainable yields or over fished.

A list of his publications can be seen here. 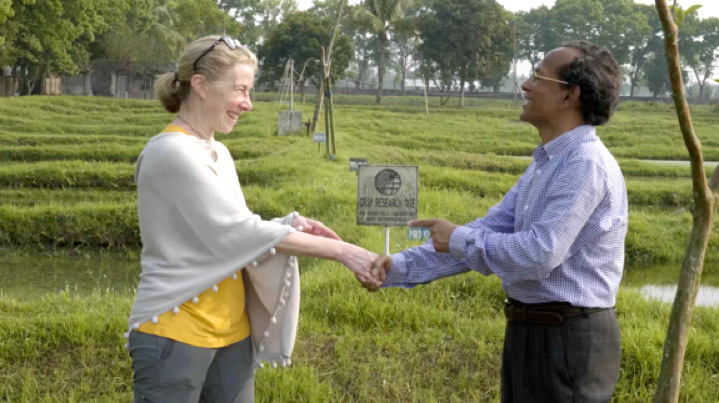 Hillary Egna is a MSc from The University of Michigan in Ann Arbor and PHD from Oregon State University, respectively. Currently, she works as a Professor in the Fisheries and Wildlife department at Oregon State University. She has extensive involvement and experience in the aquaculture research, one of her most notable positions being her work as an Director for the (now discontinued) AQUAFISH lab. Professor Egna continues to embark on small research projects, one of them being her current research work in Bangladesh. When asked what this research primary focus is, she stated "What we are looking at, is if you could grow the perfect fish with the least negative external effects, how would you do it?" The research examines small fish and how to maximize high quality aquatic animal protein, and whether humans really need to consume "meat."